Marry a Friend, Have Happier Life 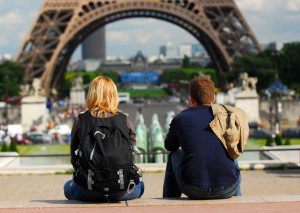 With divorce at an all-time high, some good news about marriage has arrived! This new study, conducted by the National Bureau of Economic Research, shows that marriage (especially to your best friend) can make your life happier. In our Atlanta family law practice, we think that’s something to celebrate!

Conducted mostly using data from the United Kingdom, the study says that people who are married are “more satisfied” with their lives than their single counterparts. The researchers says that the happiness is magnified especially during the “mid-life dip” when some couples are known to begin to struggle with issues such as career satisfaction, relationships and health.

The study also explores “friendship as a mechanism” and how marriage to someone who started out as a friend could experience benefits of marriage “twice as large” than those who married someone that they met and began a romantic relationship with to start with.

A Gallup World Poll was also used to “show that although the overall well-being effects of marriage appear to vary across cultural contexts, marriage eases the middle-age dip in life evaluations for all regions except Sub-Saharan Africa.” No explanation was given for why this region didn’t share the same results as their global counterparts.

Bottom line? Marry your best friend and reap the benefits!

Several years ago, I was faced with a blatant insult by my management at a federal agency. I naively followed the process for remedy and ended up in over my head because I’m not an attorney. I consulted with a dear friend, a retired federal personnel manager, who recommended Ms… END_OF_DOCUMENT_TOKEN_TO_BE_REPLACED

I have used Kitchens New Cleghorn twice. I have never been happier with any service than I was with theirs. Both times, I braced for the worst possible outcome and both times, I got far more than I could have expected. The staff is professional, friendly and quite competent. Thei… END_OF_DOCUMENT_TOKEN_TO_BE_REPLACED

The matter went to court and it was a pleasure to watch Jeff Cleghorn… absolutely demolish the opposing counsel. Every argument they brought up by citing irrelevant cases he countered by citing the correct precedent cases and even provided copies of the cases for the judge and … END_OF_DOCUMENT_TOKEN_TO_BE_REPLACED

Joyce, I have been so fortunate to have you and your staff on my team representing me through my very difficult life changing situation. Your hard work and determination has allowed me to move on to the next phase of my life with peace and dignity. It was with your high level of … END_OF_DOCUMENT_TOKEN_TO_BE_REPLACED

Randy, Jeff and Alex were an awesome support to me while going through my divorce. They conducted themselves in a very professional manner, had a great knowledge of the legal system and more importantly were compassionate to my feelings. I would recommend this group to anyone nee… END_OF_DOCUMENT_TOKEN_TO_BE_REPLACED